The beauty and the joy of the unexpected are more glorious than the expected triumphs. Sparsham – a CSR club of School of Management Studies, CUSAT is the fruit of such an unexpected event. During the prestigious 34th Talentime festival conducted annually, a CSR event (Just like other marketing/Best manager events) was introduced to gauge the interest of students in sustainable development and social service. And after the event, the team had planned a small visit to Valsalyam, a home for kids not younger than 5 years to share sweets with kids, bought utilizing the funds collected in the marketing round of the event. What followed right after was a chain reaction. The event was well appreciated and during the 35th Talentime, the CSR team expanded its scale of operations. Along with the management rounds, team decided to take the 4 finalists to Valsalyam to spend quality time with the kids. The fund collected for the event was used to buy goodies for them as per their requirements. The endearing words spoken out of love by the sisters of Nazareth, the caretakers were a fulfilling experience like never before.

This encounter ignited a spark in the CSR team members and they wanted to keep the club going further. SMS has in its 55 years of existence then, witnessed many CSR clubs sprouting but each faded into oblivion. The team wanted to make this CSR club an everlasting one, an identity of SMS. They believed wholeheartedly that such a platform would help us to think about sustainability, financial inclusion and diversity and the same would encourage us to be better managers for the future. Three months after the 35th Talentime, the dream was given a design. The CSR club was finally made official with a formal structure and objectives after a series of discussions with the college management under the current name “SPARSHAM”. A proposal was shared with the then director Dr. Mavoothu sir who had extended great support and motivation for the team to go on. In 2019, the first official committee was formed and there was no turning back. Sparsham took up many activities to give support to the needy. A bank account was formed to raise funds for the Sparsham activities and the summary of the same is shared in its official meeting at the year-end. 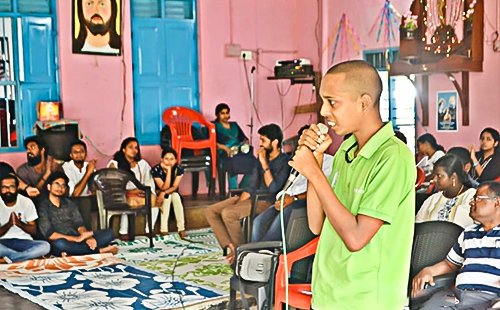 ABHAYABHAVAN
Perumbavoor
9th March, 2019
Started from a simple idea of providing meals to the inmates of Abhayabhavan, A home for the homeless and the mentally challenged. This visit turned into a big success with over 40 volunteers, cultural programs, and soulful smiles. On 9th of March, 2019 students of SMS CUSAT headed there accompanied by the then director of School of Management Studies, Dr.D Mavoothu and faculty Dr.Manoj Edward. To smile despite all your troubles is nothing short of magic and we witnessed it that day. 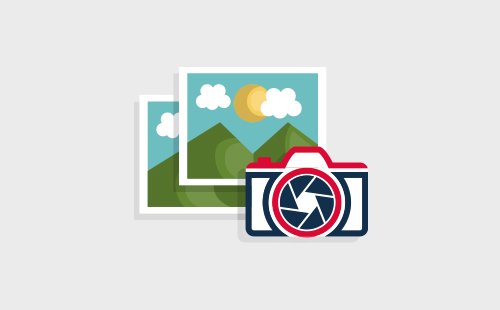 LEARNING INITIATIVE
Kakkanad
Nothing is as precious as sharing knowledge. It was with this in mind and due to the request of the superintendent, the learning initiative was launched at Children’s home at Kakkanad. The tagline “Their wings need your power. You can make them fly.”, attracted many volunteers. The selected volunteers helped the students ranging from 4th to 12th grade with their academics every weekend and as per the convenience of students. With the active participation of the students and the volunteers, we achieved better academic results. The positive feedback gave us the strength to push forward and do more with Sparsham. LULU MALL
Edappally
16th & 18th December 2019
It is not a huge deal for the majority of us to visit LULU but we often don’t realize that there are many people for whom it is a luxury to even see it once. That's where students of SMS, CUSAT, and members of SPARSHAM CSR CLUB, who are gratefully fortunate set out to, with kids thanks to the huge help and support from our alumni and staff. On the 16th and 18th of December 2019, kids from Alphonsa Sadan, Angamaly joined us in LULU to spend some memorable moments together. Sparsham inaugurated the event with an informal cake-cutting ceremony with the excited kids. Soon after, the kids were taken to enjoy different rides at SPARKYS, LULU. Post lunch, we had arranged a 5D visual treat for them. When it was time to bid adieu, to make them smile a little bit more, the kids were treated with a small surprise gift. 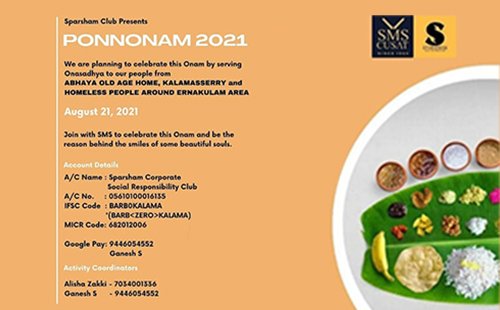 PONNONAM 2021
August 22, 2021 Abhayabhavan
Old Age Home
Onam is one of the happiest celebrations of Keralites. It is a time when people come together and share happiness and love without any barricades. On such a day the Members of Sparsham, SMS along with other volunteers from SMS worked along to provide Onasadya to the residents of Abhaya Old Age home. Food was distributed to the patients in Government Medical College, Kalamassery. As a token of love and appreciation for all the work that is done by the guards, payasam was distributed to the security guards at the CUSAT campus.

Bite of love- In collaboration with the READIFINE club
Feb 14, 2022
On Valentine’s Day, small attempts from our side to rejuvenate love and renew hopes in the residents of Abhaya Old age Home and Government Children’s Home, Kakkanad. 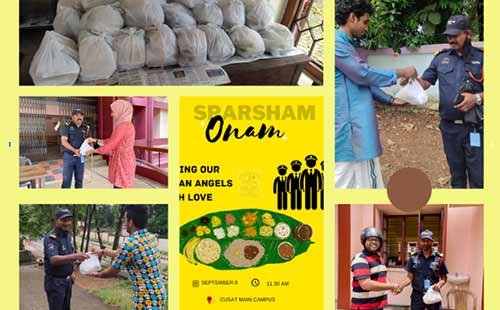 Onam is a time for every Malayali to embrace our culture and spend quality time with our beloved ones. The task of ensuring safety of an institution and its people is a noble one which goes unrecognized. Sparsham decided to spend this year’s Thiruvonam (Sept 8th, 2022) by organizing Onasadya for the security personnel at CUSAT. The program was a memorable one with volunteers and SMS Alumni joining together for a day of giving. 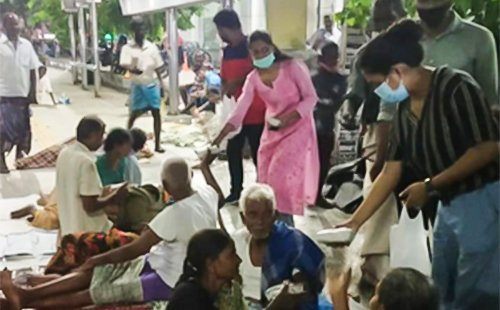 The club distributed 50 meals among the needy across various parts of Kochi on 12th April 2022. Thanks to all the volunteers who helped to raise the fund and distribute the food packets.

Sparsham currently is a group of students in SMS, backed by its strong alumni, who intend to do good for the people around them. Sparsham strives to provide opportunities to the students and faculties of SMS to be a part of socially relevant activities. The club believes in trying to bridge the gap between the financially fortunate and the unfortunate members of society with their best abilities. Sparsham has successfully carried out many welfare programs for children, flood relief activities, and much more.

Even with the passing years and the changing batches of students, the core values of Sparsham remain the same. The roots of Sparsham have penetrated deep and are here to stay. The seeds of inspiration fall not far away, it grows and expands, each spreading the message of care for tomorrow.